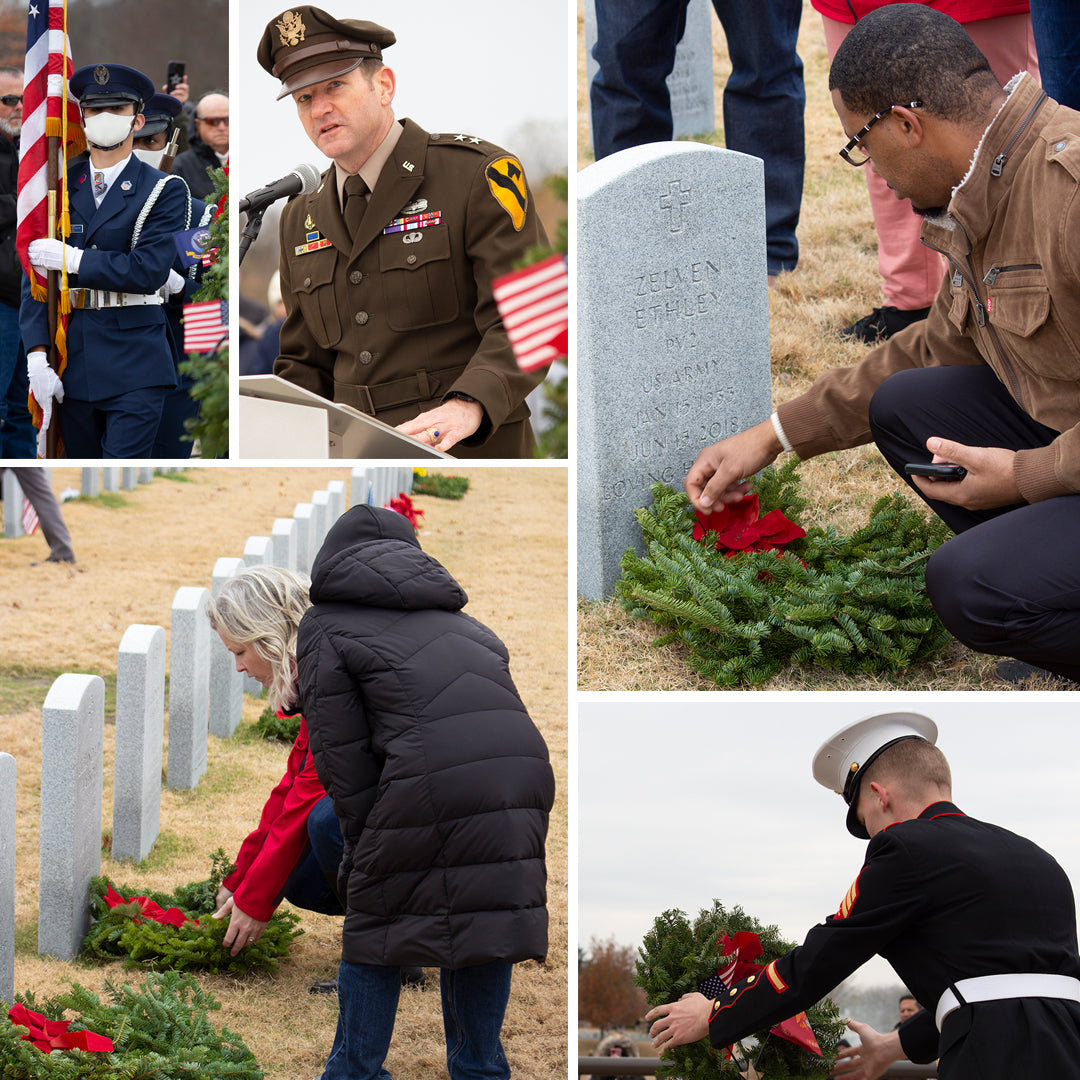 Two members of our Patriot Mobile family recently participated in the annual Wreaths Across America Day, held at our national cemeteries around the country and even abroad. This event was created to show honor and respect for the military heroes who so bravely served America.

Rodney Banks, Member Services Manager, and Michelle Savage, Fulfillment Supervisor, attended the ceremony at the Dallas Fort Worth National Cemetery to lay wreaths on the graves of their own family members. Rodney said this is becoming a Christmas tradition in his family as almost a dozen of his relatives joined him in honoring their veteran family members.

“I have a lot of family out there, I’m a Navy vet as well, and so it means a lot for us. I think serving in the Armed Forces is the greatest sacrifice anyone can make,” Rodney said. It was quite an emotional and patriotic ceremony presided over by Maj. Gen. John B. Richardson, commanding general of the 1st Cavalry Division at Ft. Hood. The ceremony also featured a flyover by the Service Air Corps, the singing of the National Anthem by the Good Times Chorus, presentation of the U.S. National Colors, ceremonial wreath placements by each branch of the United States Armed Forces and a call to order. The family members who attend are then able to lay the wreaths on their loved ones’ graves, and volunteers work to lay wreaths on each one of the over 40,000 gravesites as well. Volunteers are asked to say the fallen veteran’s name out loud as they lay the wreath to keep the memory of that soldier alive.

Michelle shared that her grandparents are buried there. One grandfather served in the Air Force and one served in the Army. She thinks it is important that we show honor and we remember what their service means for us. “They sacrificed so much for us during World War II; sacrificed for their country and gave up so much time with their family. And those sacrifices brought us to the great nation we became,” Michelle said.

Wreaths Across America is a non-profit whose purpose is to “REMEMBER – our fallen soldiers, HONOR – those who serve, and TEACH – your children the value of freedom.” Annually, they coordinate wreath-laying on veteran graves at Arlington National Cemetery, as well as 2,500 other locations across the nation, at sea and abroad.

The wreath is not just a pretty Christmas decoration. For centuries, the wreath has been a symbol for the everlasting life made possible by the birth of Jesus who eventually laid down His life for us. How fitting that we recognize those who have laid down their lives for us in such a way.

Michelle, whose husband and four kids attended the ceremony with her, said, “A lot of the respect my generation has for veterans comes from the stories I heard from my grandfathers. Now it is important for us to pass those stories on to the next generation.” There is a story attached to every single grave marker in our national cemeteries…a story of honor, duty and sacrifice…and together, they knit for us the fabric of our freedom.

The staff at Patriot Mobile wishes you and your family a very Merry Christmas and we pray that you know that the ultimate sacrifice was made by our Lord and Savior, Jesus Christ. Let us remember and celebrate, for LOVE itself came into the world to bring light into every dark corner.