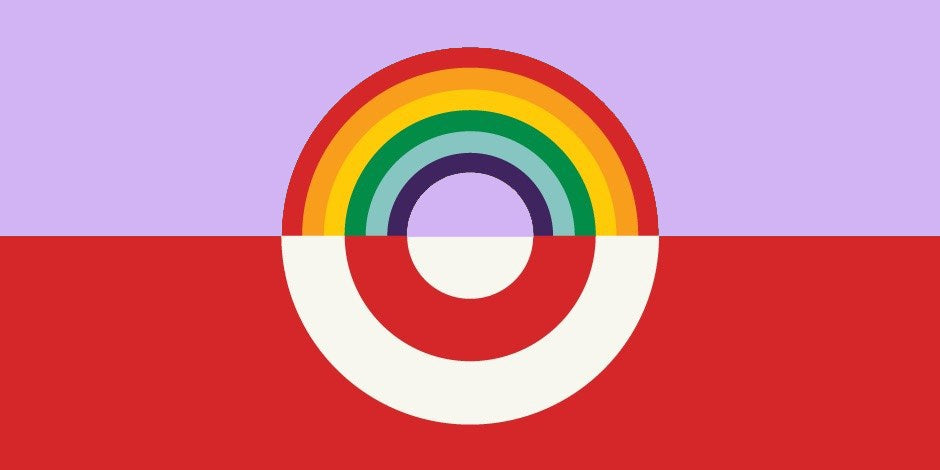 My Target Break-Up: It’s You, Not Me

Oh Target! How did I love thee? Let me count the ways. I loved idly browsing your end-caps as a method of Mommy Escapism, and I thrilled at the fantastic clearance deals I procured along the way. Stacking Cartwheel deals with sales and then adding a manufacturer’s coupons allowed me to obtain free toiletries for my family, and left me feeling giddy and elated. I wore your Liz Lange maternity merrily during my four pregnancies, while my Littles donned your Circo brand proudly. No one was a bigger fan of those big red circles than I, Target. Sadly, you quit respecting me and those like me, and as such, you forced me to move on

I began to notice you were a pusher of liberal social agendas when, well before gay marriage was struck down on every state ballot, you instituted your gift registry for same sex weddings. That’s OK, I rationalized. This doesn’t affect me personally, and great deals are great deals, after all. In 2005, you released a statement saying that you will no longer be using the term “Merry Christmas” in your marketing, signage or ads. As at least 70% of our nation claims to be Christians, this caused me to raise my eyebrows. The backlash created by this resulted in you, Target, reverting back to your current advertising scheme. So again, I was good to go. When you decided to remove all gender from signs, I got a little more irked. You stated on your corporate blog: “Right now, our teams are working across the store to identify areas where we can phase out gender-based signage to help strike a better balance. For example, in the kids’ Bedding area, signs will no longer feature suggestions for boys or girls, just kids. In the Toys aisles, we’ll also remove reference to gender, including the use of pink, blue, yellow or green paper on the back walls of our shelves.”

“Say what?” I thought. We are removing gender from signs now? Based on what? Why? I believe gender is an essential part of who we are. Who gives a flip if you show a girl baby in a pink blanket? Why are we erasing gender and pretending it doesn’t exist. At this point, I seriously considered a separation. But I’m weak, Target. I returned as soon as I ran out of free toothpaste.

Then came April 19, 2016. You were on top of the world, my friend. Stocks were soaring, my love for you was strong and abiding, and I was spending $300-$500 a month at your stores. Then came The Announcement: “We believe that everyone…deserves to be protected from discrimination, and treated equally. In our stores, we demonstrate our commitment to an inclusive experience in many ways. Most relevant for the conversations currently underway, we welcome transgender team members and guests to use the restroom or fitting room facility that corresponds with their gender identity.”

Say WHAT!!? 0.03-0.05% of the nation identifies as transgender and you’re changing your entire bathroom and fitting room policy to support THEM? What about the rest of us? The majority of your stores already HAVE single stalled bathrooms for families. I should know, I’ve frequented enough of them. But this wasn’t about THAT. THIS was about shoving your liberal ideals and promotion of alternative lifestyles down our throats until we accept them as OK. THIS is about giving up our Christian beliefs, our conservative beliefs, and our well-ingrained family values to fit your idea of society. What you clearly didn’t understand is this: I am less concerned with the small possibility that I may run into a dude dressed as a woman in my local Target bathroom and much more concerned with the teenage boys that will think it’s a hoot too, on a dare, use the bathroom while my teenage daughters are doing their business. I’m less concerned about some woman who has had gender reassignment surgery peeing in the boys’ room, and more concerned about impatient women who are tired of the long lines during holiday shopping so they head over to the boys’ room where my young sons are peeing. How humiliating for my children. How embarrassing for them to have to deal with that! And I’m MOST concerned about the disgusting perverts who are using your new policy to sneak a peek at our children. It’s happened, Target. You know it has.

No, Target. That, that right there, was the impetus for our break up. I left your store and never looked back. I did the only thing I could and boycotted with my wallet. I didn’t dress up like a vagina and march. I didn’t riot and burn things.

I found out my cell phone company donated heavily to liberal causes. I switched to the only company that donates solely to conservative causes (www.patriotmobile.com. Check them out). I took myself, and my money, to other stores. I, along with 1.4 million other like-minded conservatives, signed a petition (https://www.2ndvote.com/anywherebuttarget-everyone-else-saying/) and started a boycott on your attempted re-engineering of society. I never DREAMED that our little boycott would amount to anything. I was SURE the corporate giant that is Target (insert angelic chorus here) would never falter. But I was wrong. In April 2016, your shares were selling at nearly $83 a share. Today, it’s at $53.

Now, I’m no economics major, but even I know that a loss of 36% is bad news. Your liberal cohorts in the news may be keeping silent about this, but a loss of 9.2 BILLION dollars is never good for a company. So, Target, when I left you and said, ‘It’s not me, it’s you.” I, and my other 1.4 million friends weren’t lying. It’s you, baby. You turned your back on your base, and doubled down on your desire to shove your liberal ideals down the throats of conservatives like me, and you lost…BIG TIME!