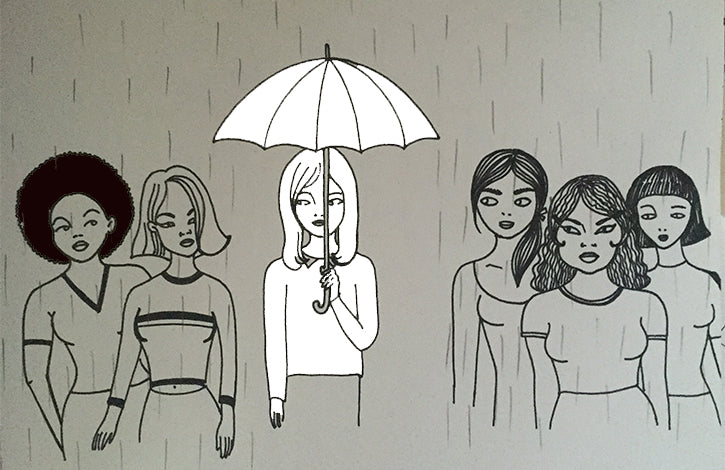 I am Feminine, but NOT a Feminist!

How have you been oppressed today? No, seriously! Take a minute, sit back, and mull over Every. Single. Moment. of your day to chew slowly on each thing that has bumped your little sphere of existence. Did someone’s choice of shirt offend you? Write that down. What about the Uber driver who had a cross hanging on his review mirror? Must be a symbol that he hates Muslims. When the news anchor used “him” instead of “her” in reference to a transgender individual, did it make you want to lose your mind? If you feel like any of these statements are outrageously accurate representations of your life, you might be an American Liberal! Maybe, just maybe, you could be a Feminist too!

Some people have found so many ways to become offended that it has become laughable to the rest of us! There are theories and agendas galore. But here is the current news-trending agenda that really gets me fired up: I am a woman so therefore I must be a Feminist.

This really gets under my skin. There are so many reasons I cannot reconcile this with my life. Over the last two months, Women’s Marches have taken place all over the country in which large crowds of women wear all red or pink, crocheted hats that look like cat ears (there is a disgusting reference here), and all wave large signs with “Resist!” and such written on them. You can read about the latest one here: http://time.com/4695840/womens-march-arrests-trump-hotel/

I condemn this. I condemn the belief that I am a victim of some mass agenda to “put women in their place.” I have never felt oppressed. No man has ever attacked me verbally or physically. Birth control has always been freely available on every street corner. I have never had anyone tell me to put on more clothes, or take any off for that matter, for their own enjoyment. I have never held a job where I was paid below minimum wage or paid less than my male counterparts. I have been praised for my beauty, and applauded for my scholastic achievements. No service at any hospital, restaurant, salon, or store has been denied me because of my gender.

If anything, I have always felt as if I got special perks for being female. When my boyfriend struggled with a minimum wage job in high school, I was raking in the cash at $15 an hour babysitting because, traditionally, young male babysitters made parents feel uncomfortable. Police officers were gentler on me when I got pulled over. The whole “women and children first” mentality? Yeah, love that! When a waiter pulls out the chair for me first, or pours my drink before he pours my boyfriend’s? Is that how you feel oppressed, all you Feminists?

Feminists today make me feel like I have to let my leg hair grow out, dye my hair blue, go bra-less, and shun the idea of ever wanting children one day. This is wrong! I am THANKFUL for the women who came before me- real suffragettes who gave us the vote, and brought us out of the dark ages. But to make me feel as if my life will be disappointing and unfulfilling if I chose to stay home and have babies? That’s just slapping the faces of every wonderful and strong woman who helped you get to where you are today.

I am so confused by today’s Feminist agenda. Do they hope to end female rape by marching on Washington? That won’t happen until they rid the world entirely of evil, and convince white collar men, like their husbands, to stop buying porn from their work computers. Do they hope to put more women in STEM fields by yelling at the President? More women would get there if they stopped choosing degrees like “Women’s Studies” in college and if they spend time studying rather than marching! Do they want better access to birth control? I’m not sure how to make it any easier than it already is to get a $2 pack of condoms at every gas station on every single corner. Do they want to get paid as much as men in every field? Then stop taking a year off at a time to go have a baby! When have we ever allowed men that privilege?

I am not a Feminist. I cannot allow myself to be poisoned by this group. I don’t feel the need to “Resist” anything because, honestly, no one has ever made me feel as if I need to! Why are we not reaching out to the poor women in the Middle East and Asia who are stoned if they are in public without a man? What about the little girls who are tied up and used as sex slaves in Latin America to satisfy the tastes of evil men? What about little boys who are dying of HIV in East Africa because of no fault of their own? Oh, that’s right. It’s just their “culture.”

Please tell me again how President Trump is hurting you and oppressing you. Stay home from work- you’ll just be passed over for someone more grateful and more willing. Americans are so blessed!!

Today, sitting in my coffee shop, I am alone in public without a man. I have never been tied up as a sex slave. I have no infectious diseases, and my chances of coming in contact with one without readily available healthcare is almost one in a million. I have a wonderful job that helps pay my bills, and I know I have the job because I am smart, talented, and worthy. I don’t want a man’s pity or subservience out of his fear of retaliation from a governmental agency.

I am Woman. I am feminine. I am worthy without the help of blue-haired, angry women.